Three doors to the workshop

Through the first heavy door into a dark hallway. Behind the second door there is daylight, and a wild green small courtyard behind old glass panes. In the third door simple window glass, a peek into the workshop. Inside it’s all corners and niches, not very roomy, workbenches and tools radiate many years of work.

Freiburg’s Talstrasse has been the third station of the Sandal Workshop, for a little more than 30 years now. You can’ t see anymore that this has once been a bakery. At the entrance there is the sandal collection on a low shelf, a coal stove is in the center of the room.

A narrow staircase leads to the upper floor, which has been restored and prepared for workshops and classes. Round ceiling lights resemble skylights, you look at the beams, the house is old after all. 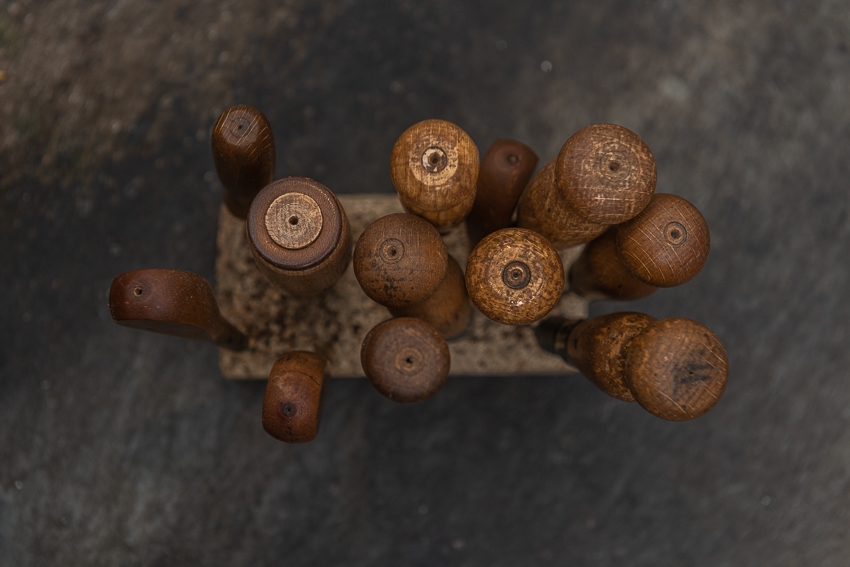 It all started in the 1970s, with the White Shop (“Weisser Laden”) located in the Adelhauser Strasse. The White Shop not only sells sandals, but also books, and now and then you get a free apple to boot. It is one of the meanwhile legendary “alternative projects” of the seventies and eighties.

The principal idea of the shop: To offer a meaningful product, work self-determined, a good deal of customers are friends, family and acquaintances. There is hardly any advertising, the customers just drop in, amongst them many students or people closely related to the then thriving environmental movement, or “eco-scene,” as it was called in Germany.

There’s quite a few people who work in the shop or just give a hand, usually for a limited time, and then go other ways. One who is involved very early on is Andreas Thilo, soon joined by Heinrich Assies. These two remain – and soon they “are” Sandal Workshop Freiburg.

By the end of the 1980s, fewer customers visit the shop. The sandal makers decide to go where the customers are: They set up their sales stand at craft fairs, artisan markets and eco fairs. And it works. The Sandal Workshop is back in the black. It remains, small but alive. 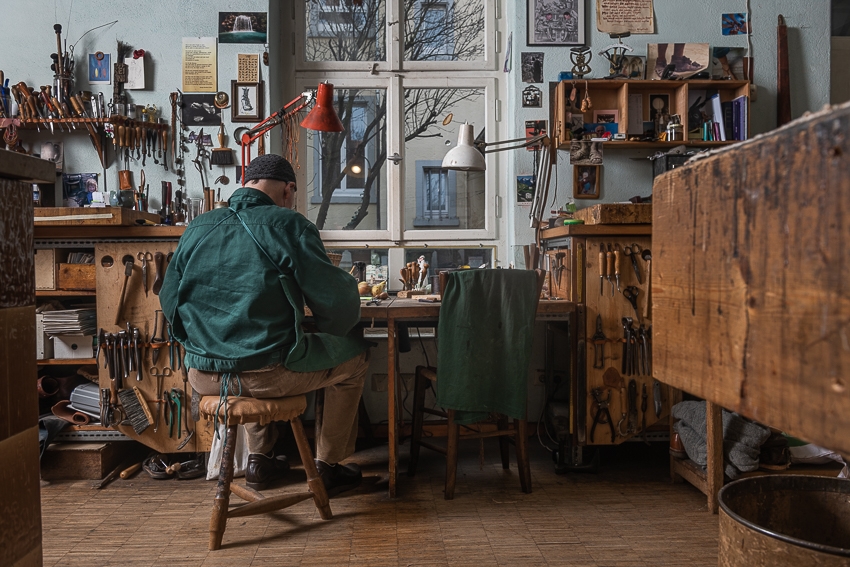 A leap in time. It is 2019. A Japanese orthopedic shoemaker, Norihiko Tsukinowa, comes across the exhibition showcase of the Sandal Workshop in Freiburg’s pedestrian zone. Meets Thilo and Assies, arranges an internship. And he decides to step in.

The Corona virus somewhat disrupts his plans however. But time does not pass unused: The old website is revamped, an online store is created, workshops and courses are planned. In Japan, such workshops are very popular – so why not in Freiburg?

The fundamental ideas from the 1970s, they still turn out sustainable in the 2020s. A meaningful and well-made product, made of the best material, handcrafted, in a distinctive style, from a workshop that also draws on the personality of its three sandal makers: This is the Sandal Workshop Freiburg today.

It is a friend who comes up to Andreas Thilo in the 1970s and says: Why don’t you come with us to Freiburg? It is the years shortly after the energy crisis, the architect Thilo, previously involved in large projects such as Olympic buildings or school centers in Munich, currently has no employment. And he comes.

Friends had started making sandals at a farm not far from the city. The next step is the White Shop in Freiburg, which Thilo helps to establish. Sandals and bags are made there, yet on only a small scale. The simple models are called Mexico and Sahara.

Thilo tries his hand at the sandals, develops a routine, gets better and better, and soon is the driving force behind the development of the sandals. Maybe it is the systematic approach of the architect, who will soon be overseeing smaller and larger construction projects in his new home, that comes in helpful.

Eventually, he decides to set up his own workshop. It is 1980, he moves to a new location, Kirchstrasse, works with his own tools. Thilo is not alone, the coworkers change, men and women, some are quite committed, some are only around for a short time.

In the early 1980s, the Freiburg sandal makers take over the workshop of a bespoke shoemaker in Berlin, and Andreas Thilo works in turns in Freiburg and Berlin. And it is in Berlin that he meets one of many advisors from whom he learns over the years, an Israeli shoemaker who shows him how to make his first simple shoes.

At the same time, the sandals are becoming more and more sophisticated and well-developed. Originally very simple models get a footbed, which is constantly refined, the small series manufacturing gets abandoned, from now on it is all about bespoke sandals.

Orders come in regularly. Just not during the winter. Sandal making is a seasonal business. Thilo begins to teach sandal-making classes in Waldorf schools, and after a while there are six schools that see him teaching. Thilo will teach for more than twenty years.

Meanwhile, Heinrich Assies jas joined him. Together they create new models of sandals, and also some shoes. And in 1991 it is a new workshop in Talstrasse in Freiburg, simple but with more space. This is where the Sandal Workshop Freiburg is located today.

It’s the 2020s. Thilo, together with Heinrich Assies, has created a well manageable but fine collection of sandals. The sandals are as good as a seemingly simple product can be. Thilo is still at it. And still sees room for improvement.

Heinrich Assies, sandal maker. Not an office machine mechanic after all.

How do you become a sandal maker in Freiburg if you grow up with six siblings on a farm in Emsland in one of the northern regions of Germany and then complete an apprenticeship as an office machine mechanic? Heinrich Assies goes back to school in the mid-1970s after finishing his apprenticeship, and he has time to look around a bit.

In Freiburg, for example. There he accidentally comes across the White Shop. There’s sandals in the showcase. They look much better than his orthopedic shoes. “I got to have these,” he says to himself, steps into the store and meets Andreas Thilo. His bespoke sandals will later be shipped to their new owner.

“I only wore them on Sundays in the beginning. But after a while I saw that the sandals were quite sturdy altogether.”

Assies visits the White Store and Andreas Thilo several times over the next few years, and he brings friends to whom he is keen to show the store. One day he stands in front of a closed door, Thilo has moved with his tools, machines and the whole shop. He asks some neighbors, walks all the way to the new address.

He earns his high school graduation, attends an anthroposophic youth seminar, geared to finding a profession, in Stuttgart, then follows a one-year intermezzo at the art school in Freiburg-Munzingen, specializing in sculpture. The school turns out not so interesting after all. But all the same: Assies has arrived in Freiburg.

He enrolls at the university, but then makes a completely different decision. He chooses the sandals. He learns from Andreas Thilo and others, and he is skillful. In teaching, too: From time to time he teaches sandal-making classes in schools, until today regularly in the Freiburg Waldorf School.

He becomes a true master sandal maker. All without an apprenticeship or a craftsman’s diploma. He immerses himself in the work with leather, cuts, dyes, shapes, glues, sews, engages in developing the collection. And as it goes with craftsmen: What he can do is visible in his hands.

And because, of course, passion for the work has long been part of the game, for him there is also no age limit. Heinrich Assies is a sandal maker. And wants to remain so.

“How much can you leave out, what is essential to make a thing really good?” For Norihiko Tsukinowa, an economist with a degree from Kyoto University, educated in his home country Japan at the College of Orthopedic Shoemakers in Kobe, graduate of the dual training program for orthopedic shoemakers in Muenster, Westphalia, these are vital questions.

In 2016, he starts working as an employed orthopedic shoemaker near the Swiss border, advising his customers, making individually molded insoles for shoes. And looks around intently. Visits tanneries. Is a regular guest at bespoke shoemaker meetings.

He shares ideas with bespoke shoemakers, located all over Germany. Dabbles in other leatherwork and saddlery such as bags and belts. And considers to work independently, maybe with his own store.

Norihiko Tsukinowa visits the Sandal Workshop, it is 2019. He had already heard about the workshop a few years earlier, and now he meets Andreas Thilo and Heinrich Assies. And gets to know the sandals, which he now very carefully examines.

You can’t leave anything out with these sandals, Thilo and Assies never cared about changing fashion trends. They also never spared on the quality of material to attract maybe a few more customers with a lower price.

That’ s exactly what fascinates the man from Japan. A simple concept. Excellent material. A really good product. One could even see parallels to a distinct Japanese aesthetic of simplicity. But you don’t need to: The sandals simply match the taste of Tsukinowa. 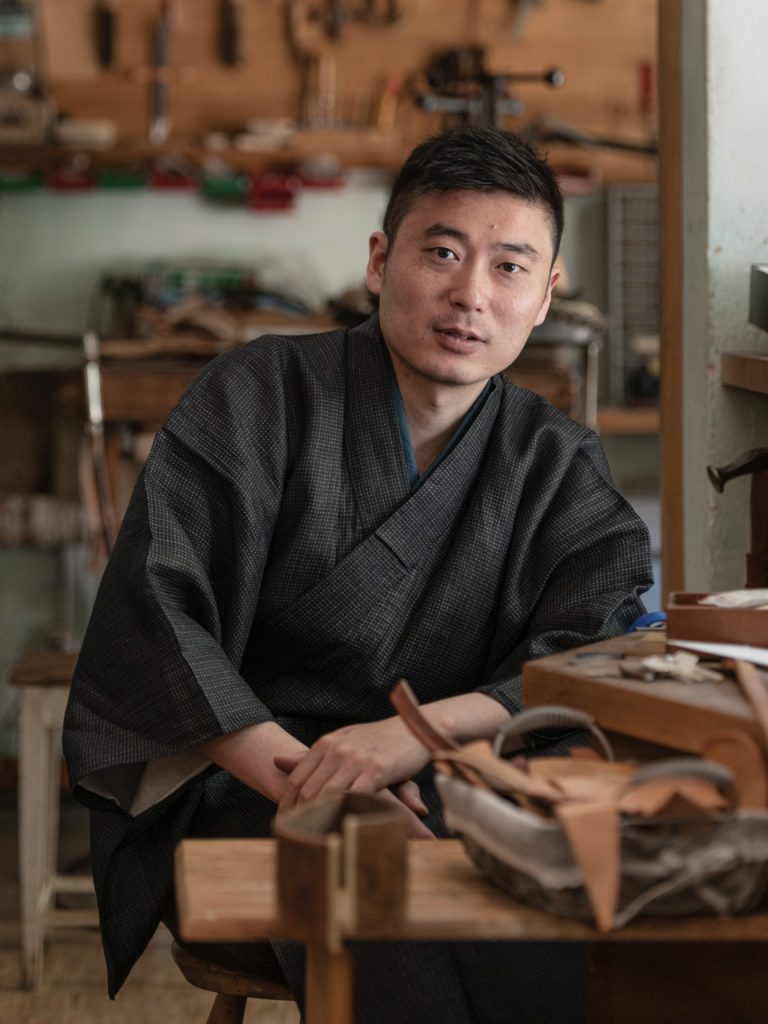 Alas, the desired internship in the Sandal Workshop has to be postponed. Corona. Still, the three men get to know each other a little better. The skills of Norihiko Tsukinowa fit the Sandal Workshop, everyone appreciates the talents of the other.

It is 2020. Norihiko Tsukinowa is working in the Sandal Workshop. He will continue to run it together with Andreas Thilo and Heinrich Assies. And just like these two he will offer sandals, shoes and soon other leather works that refer to long traditions, but are still quite unique. 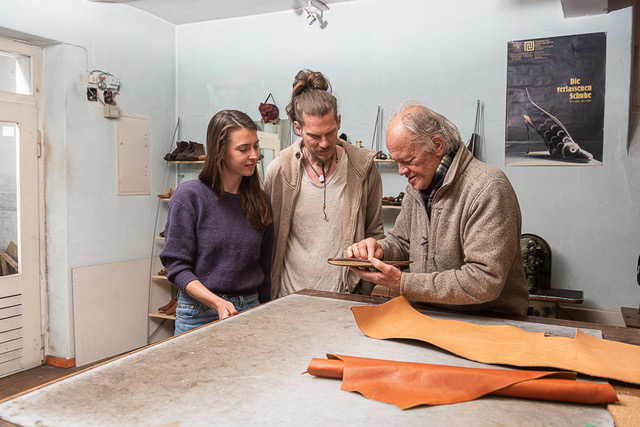 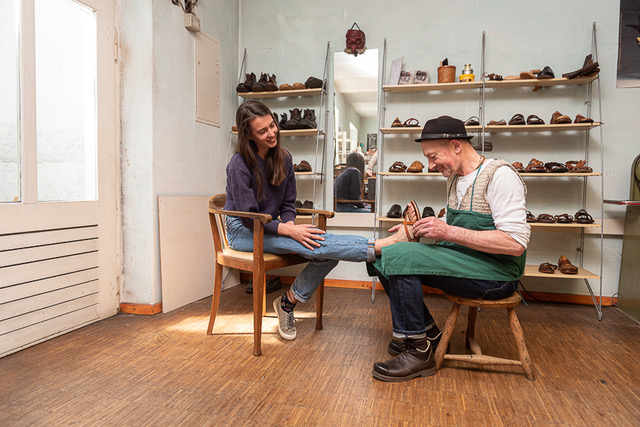